Applying the concept of convexity to startups has been lodged in my brain since Aug. 2018 . So to finally get the idea out of my head, some notes on what I call... 📈Convexity Machines 🤖

So, what is "Convexity"?

Here's a quick/modified definition of "convexity." For some action you take:


and the environment in which these actions are performed is necessarily volatile. That is, one filled with variability, imperfect, disorder, randomness, etc... 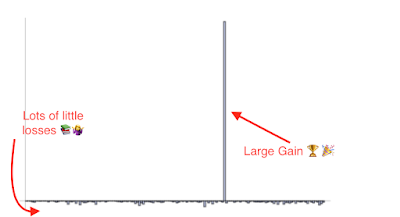 I call startups with convexity at the core of their models: “Convexity Machines.”

These startups are in the business of creating massive convexity for their users.

(To go deeper on this ^, Nassim Taleb's UNDERSTANDING IS A POOR SUBSTITUTE FOR CONVEXITY (ANTIFRAGILITY) is a great place to start)

What are the characteristics of Convexity Machines?

Now let's apply that definition of convexity to startups. I see 4 primary characteristics of Convexity Machines:
Though I think that true convexity machines unambiguously meet each of those criteria, convexity as a whole though exists on a spectrum.

To the far right are some examples of Convexity Machines (@tiktok_us, @SoundCloud, @instagram, @wattpad, @numerai, @pioneerdotapp)

On the left are counterexamples that (excluding Figma), still produce extreme levels of convexity for their users. A quick explainer on why each of the 4 counterexamples don't fit the mold:

Why is this notable?

For a first crack at answering this question, here is a mouthful:

I believe these are the early days of digital environments successfully harnessing randomness produced by an unbounded number of users in a way that enables the top performers to get selected and win big.

Perhaps we will soon see Convexity Machines rising, falling, and proliferating within many more creative niches.

The biggest question on my mind today is: what areas of creativity can’t this model touch?