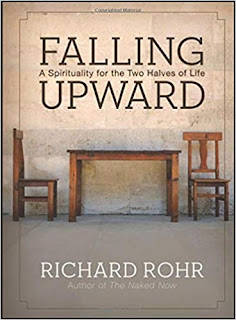 Fall Upward: Falling Upward: A Spirituality for the Two Halves of Life by Richard Rohr

"There is much evidence on several levels that there are at least two major tasks to human life. The first task is to build a strong “container” or identity; the second is to find the contents that the container was meant to hold. The first task we take for granted as the very purpose of life, which does not mean we do it well. The second task, I am told, is more encountered than sought; few arrive at it with much preplanning, purpose, or passion." (Location 219)

"We all try to do what seems like the task that life first hands us: establishing an identity, a home, relationships, friends, community, security, and building a proper platform for our only life. But it takes us much longer to discover “the task within the task,” as I like to call it: what we are really doing when we are doing what we are doing." (Location 226)

"...the task of the first half of life is to create a proper container for one's life and answer the first essential questions: “What makes me significant?” “How can I support myself?” and “Who will go with me?” The task of the second half of life is, quite simply, to find the actual contents that this container was meant to hold and deliver." (Location 521)

On the first half of life


"Almost all of culture, and even most of religious history, has been invested in the creation and maintenance of first-half-of-life issues: the big three concerns of identity, security, and sexuality and gender. They don't just preoccupy us; they totally take over." (Location 550)

"If you try to skip the first journey, you will never see its real necessity and also its limitations; you will never know why this first container must fail you, the wonderful fullness of the second half of the journey, and the relationship between the two." (Location 541)

"Unless you let the truth of life teach you on its own terms, unless you develop some concrete practice for recognizing and overcoming your dualistic mind, you will remain in the first half of life forever, as most of humanity has up to now. In the first half of life, you cannot work with the imperfect, nor can you accept the tragic sense of life, which finally means that you cannot love anything or anyone at any depth." (Location 2221)

On the second half of life


"It is when we begin to pay attention, and seek integrity precisely in the task within the task that we begin to move from the first to the second half of our own lives. Integrity largely has to do with purifying our intentions and a growing honesty about our actual motives. It is hard work. Most often we don't pay attention to that inner task until we have had some kind of fall or failure in our outer tasks. This pattern is invariably true for reasons I have yet to fathom." (Location 240)

"In the second half of life, we do not have strong and final opinions about everything, every event, or most people, as much as we allow things and people to delight us, sadden us, and truly influence us. We no longer need to change or adjust other people to be happy ourselves. Ironically, we are more than ever before in a position to change people—but we do not need to—and that makes all the difference. We have moved from doing to being to an utterly new kind of doing that flows almost organically, quietly, and by osmosis. Our actions are less compulsive. We do what we are called to do, and then try to let go of the consequences. We usually cannot do that very well when we are young." (Location 1911)

"This new coherence, a unified field inclusive of the paradoxes, is precisely what gradually characterizes a second-half-of-life person. It feels like a return to simplicity after having learned from all the complexity. Finally, at last, one has lived long enough to see that “everything belongs,” even the sad, absurd, and futile parts. In the second half of life, we can give our energy to making even the painful parts and the formally excluded parts belong to the now unified field" (Location 1825)

"So our question now becomes, “How can I honor the legitimate needs of the first half of life, while creating space, vision, time, and grace for the second?” The holding of this tension is the very shape of wisdom." (Location 2075)


"A “perfect” person ends up being one who can consciously forgive and include imperfection rather than one who thinks he or she is totally above and beyond imperfection." (Location 336)

"Mature people are not either-or thinkers, but they bathe in the ocean of both-and." (Location 627)

"To build your house well is, ironically, to be nudged beyond its doors." (Location 768)

"The world is more magical, less predictable, more autonomous, less controllable, more varied, less simple, more infinite, less knowable, more wonderfully troubling than we could have imagined being able to tolerate when we were young." —James Hollis, Finding Meaning in the Second Half of Life

"Any attempt to engineer or plan your own enlightenment is doomed to failure because it will be ego driven. You will see only what you have already decided to look for, and you cannot see what you are not ready or told to look for. So failure and humiliation force you to look where you never would otherwise. What an enigma!" (Location 1249)

"To hold the full mystery of life is always to endure its other half, which is the equal mystery of death and doubt. To know anything fully is always to hold that part of it which is still mysterious and unknowable." (Location 1794)

"Invariably when something upsets you, and you have a strong emotional reaction out of proportion to the moment, your shadow self has just been exposed. So watch for any overreactions or overdenials." (Location 2020)