Karl Popper's "All of Life is Problem Solving" - Selected Highlights 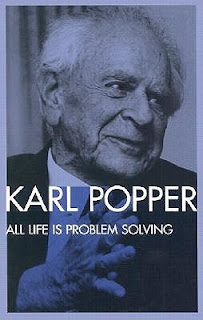 The Logic and Evolution of Scientific Theory

"It is very important to appreciate the huge difference between a thought that is only subjectively or privately thought or held to be true...and the same thought when formulated in speech (perhaps also in writing) and thus presented for public discussion." (8)

"We are always learning a whole host of things through falsification. We learn not only that a theory is wrong; we learn why it is wrong. Above all else, we gain a new and more sharply focused problem; and a new problem, as we already know, is the real starting point for a new development in science." (13)


Epistemology and the problem of peace

"My theme is large. I have worked hard but gladly to present it as simply as I can. I fear I have not fully succeeded, and I must ask for  your active cooperation.

"Science begins with problems. It attempts to solve them through bold, inventive theories. The great majority of theories are false and/or untestable. Valuable, testable theories will search for errors. We try to find errors and to eliminate them. This is science: it consists of wild, often irresponsible ideas that it places under the strict control of error correction." (39)

"The method of natural science is the conscious search for errors and correction of them through conscious criticism. Ideally such criticism should be impersonal and directed only at the theories or hypotheses in question." (39)

"The task of us all as thinking human beings is to discover the truth. The truth is absolute and objective, but we do not have it in the bag. We are constantly seeking it and often find it only with difficulty; and we keep trying to improve our approximation to the truth. If truth were not absolute and objective, we should not be able to go wrong. Or our mistakes would be as good as our truth."(55)

"We know nothing - that is the first point.
Therefore we should be very modest - that is the second.
That we should not claim to now when we do not know - that is the third.
This is more or less the approach I should like to popularize. It does not have good prospects." (56)

Towards an evolutionary theory of knowledge

"The emergence of the self-critical attitude is the beginning of something even more important: of the critical approach, an approach that is critical in the interest of objective truth." (73)

"Language makes it possible to consider our theories critically: to look at them as if they were external objects, as if they belonged to the world outside of ourselves which we share with others." (73)

"But I shall let the little I have learnt go forth into the day in order that someone better than I may guess the truth, and in his work may prove and rebuke my error. At this I shall rejoice that I was yet the means whereby this truth has come to life" (73)

"It is especially important to me that what I am about to say is not taken on trust. Indeed, I should prefer it to be treated with the utmost skepticism." (83)

"When I speak of reason or rationalism, all I mean is the conviction that we can learn through criticism of our mistakes and errors, especially through criticism by others, and eventually also through self-criticism.

A rationalist is simply someone for whom it is more important to learn than to be proved right; someone who is wiling to learn from others - not by simply taking over another's opinions, but by gladly allowing others to criticize his ideas and by gladly criticizing the ideas of others.

The emphasis here is on the idea of criticism or, to be more precise, critical discussion. The genuine rationalist does not think that he or anyone else is in possessions of the truth; nor does he think that mere criticism as such helps us to achieve new ideas. But he does think that, in the sphere of ideas, only critical discussion can help us sort the wheat from the chaff. He is well aware that acceptance or rejection of an idea is never a purely rational matter; but he thinks that only critical discussion can give us the necessary maturity to see an idea from more and more sides and to make correct judgement of it. "(84)

"For the rationalist knows that he owes his reason to other people." (84)

"The rationalist approach might be described as follow. Perhaps I am wrong and you are right; anyway we can both hope that after our discussion we will both see things more clearly than before, just so long as we remember that our drawing closer to truth is more important than the question of who is right." (84-85)

"Why does simplicity of language matter so much to Enlightenment thinkers? Because the true Enlightenment thinker ["the idea of self-emancipation through knowledge" from prev. para], the truth rationalist, never wants to talk anyone into anything. No, he does not even want to convince: all the time he is aware that he may be wrong. Above all, he values the intellectual independence of others too highly to want to convince them of important matters. He would rather invite contradiction, preferably in the form of rational and disciplined criticism. He seeks not to convince but to arouse - to challenge others to form free opinions. Free opinion formation is precious to him: not only because this brings us all closer to truth, but also because he respects free opinion as such. He respects it even when he considers the opinion so formed to be fundamentally wrong." (85-85)

"Because I am a rationalist, I do not want to convert anybody. Nor do I want to abuse the name of freedom to turn anyone else into a rationalist. But I should like to challenge others to contradict me; I should like, if Possible, to prompt others to see things in a new light, so that each may take his own decision in the freest possible formation of opinion." (87)

All of Life is Problem Solving

"Error correction is the most important method in technology and learning in general." (100)