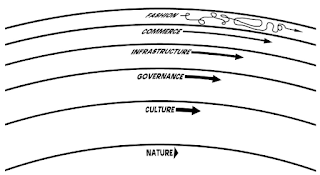 Pace layers are components of a dynamical system
The total effect of the pace layers is that they provide a many-leveled corrective, stabilizing feedback throughout the system, making the whole system resilient (adapted from source)

CAS are dynamic systems are able to adapt in and evolve with a changing environment. It is important to realize that there is no separation between a system and its environment in the idea that a system always adapts to a changing environment.
7 attributes: Distributed control, connectivity, co-evolution, sensitive dependence on initial conditions, emergent order, far from equilibrium, state of paradox (order & chaos)
(MIT — Complex Adaptive Systems)

Stocks: Accumulations of materials or information built up over time (Wikipedia)
Flows: Flows, on the other hand, are entities that make stocks increase or decrease. The presence of a flow indicates the movement of material or information (Systems Thinker)

A positive feedback loop is self-reinforcing. An action produces a result which influences more of the same action.
Positive feedback loops are sources of growth, explosion, erosion, and collapse in systems. A system with an unchecked positive loop ultimately will destroy itself. That’s why there are so few of them (Donellameadows.org)

Models used to represent how organisms and groups interact with their environments to improve their abilities to survive (Human Systems Dynamics Institute)
“You realize that for each species, its landscape consists almost entirely of other species, all of them busy evolving right back. That’s co-evolution. We are all each other’s fitness landscapes.” — Stewart Brand (edge.org)

A suggested cognitive limit to the number of people with whom one can maintain stable social relationships …he proposed that humans can comfortably maintain only 150 stable relationships (Wikipedia, more here The New Yorker — The Limits of Friendship)

Any organization that designs a system (defined broadly) will produce a design whose structure is a copy of the organization’s communication structure (Melconway.com)

Socially approved and traditional norms or standards of everyday behavior.
Folkways are social standards, not moral standards or mores and the repercussions for breaking a folkway are minimal or nonexistent. (sociologydictionary.org)

A concept that the future life expectancy of some non-perishable things (books, technologies, ideas, political systems) is proportional to their current age, so that every additional period of survival implies a longer remaining life expectancy.
Where the Lindy effect applies, mortality rate decreases with time.
(adapted from Wikipedia, more from Nassim Taleb)

Consensus mechanism (blockchain): The purpose of a consensus mechanism is to verify that information being added to the ledger is valid i.e. the network is in consensus (Consensus Mechanisms Explained: PoW vs. PoS)
Proof-of-work: an economic measure to deter service abuses on a network by requiring some work from the service requester, usually meaning processing time by a computer. A key feature of these schemes is their asymmetry: the work must be moderately hard (but feasible) on the requester side but easy to check for the service provider. (Wikipedia, more on Github)
Proof-of-stake: With Proof of Stake, there is no mathematical puzzle, instead, the creator of a new block is chosen in a deterministic way based on their stake. The stake is how many coins/tokens one possesses. (Consensus Mechanisms Explained: PoW vs. PoS, more on Investopedia)
another take via Github: PoS a category of consensus algorithms for public blockchains that depend on a validator’s economic stake in the network.
In PoS-based public blockchains, a set of validators take turns proposing and voting on the next block, and the weight of each validator’s vote depends on the size of its deposit (i.e. stake). Significant advantages of PoS include security, reduced risk of centralization, and energy efficiency.

A positive externality is the positive effect an activity imposes on an unrelated third party. (Wikipedia)

Tragedy of the commons

The trap called the tragedy of the commons comes about when there is escalation, or just simple growth, in a commonly shared, erodable environment.
When there is a commonly shared resource, every user benefits directly from its use, but shares the costs of its abuse with everyone else. Therefore, there is very weak feedback from the condition of the resource to the decisions of the resource users. The consequence is overuse of the resource, eroding it until it becomes unavailable to anyone.
(Thinking In Systems — Donella Meadows)