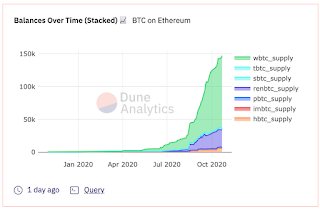 LWIC is a weekly rundown posted on Mondays that covers the biggest news from the previous week:

Welcome to a fresh week folks 👋

Last week, two Bitcoin trends continued to gain steam. First, more and more bitcoin is being put to use as “tokenized bitcoin” outside of the bitcoin blockchain. Over $1.5B of tokenized bitcoin is on Ethereum today, and other blockchains, like Polkadot, are starting to get in on the action. Second, Stone Ridge Holdings added $100MM bitcoin to its balance sheet as part of its treasury reserve strategy. They are the third large institution to announce their bitcoin holdings recently, joining two public companies: Microstrategy and Square. Expect to see more companies following suit, three’s a trend 🔥

Now, let’s catch up on what else happened last week in crypto💨

DOT - In addition to the announcement of PolkaBTC, I’ve noticed the VC money flowing into Polkadot-based startups like Purestake, Equilibrium, and Reef Finance. Nothing else to say for now, just watching to see what else the Polkadot ecosystem has up their sleeves 🧐

Heath Tarbert ❤️ Ethereum: The CFTC Chairman heaped praise on Ethereum last week, saying “Let me just basically say how impressed I am by Ethereum, full stop, period.” This was a much-needed breath of fresh air for the Ethereum community which had a roller-coaster of a couple of weeks full of regulatory actions, hacks, in-group spats, and loads of other drama.

Coinbase making moves: Coinbase had a few product releases last week that are worth knowing about. First, there is Coinbase Commerce which enables merchants to accept cryptocurrency payments. Second, retail users can now purchase tokens via their Coinbase Wallet. Third, they updated their Compound “Earn” tutorial, which I highly recommend doing.

VC money flowed into crypto: According to The Block, $897.7MM was invested in 212 crypto & blockchain startups in Q3. Looking at data from Outlier Ventures, this is up from $200 million invested in 90 startups in Q2 😲 Now, that may be comparing apples to oranges a bit, but I’d guess it’s directionally correct - I wasn’t able to find The Block’s Q2-2020 analysis 😞

Institutional money flowed into crypto: Grayscale, a large digital currency asset manager with over 5.9B AUM, had a record-breaking quarter with over $1B of inflows. Approximately $720MM of that went to their Bitcoin Trust from institutional investors. Their Ethereum Trust also became an SEC reporting company. All further evidence of the growing institutional demand to invest in crypto.